In the small village of Penna Sant’Andrea, on top of a steep hill in the Mid Vomano Valley Media Valle del Vomano, halfway between the Adriatic Sea and the chain of the Gran Sasso mountains, you can still find an ancient dance among the most archaic of the region: the ribbons of love dance. It develops all around a maypole, a symbol of a tree and the relationship with the vegetable world; the coloured ribbons, a tangible sign of the chromatic overabundance of spring and of the indissoluble connection between man and the natural world on which he depends, are woven together then unwound just like the pact of love is woven then unwound, celebrated by the circular dance and consecrated by the tying of the ribbons when a couple marries and promises to renew its union every day.

“It was at carnival, my brother and I went dressed as women, we had the hats and the boots with ribbons. When the group was formed, in the first few years we used to go to neighbouring villages, then we started going further away”.

As can be seen from the in-depth studies of the ethnochoreologist Giuseppe M. Gala, maypole dancing is a choreutical module spread throughout the European continent and also found in certain areas of North Africa (Morocco and Algeria), in West Bengal and in many parts of Latin America (Mexico, Guatemala, Venezuela, Peru and Bolivia). In Europe maypole dancing is attested in Provence with the name of danse des cordelles, while in Burgundy, near Mâcon, a similar dance called danse de rubans was in use; the same dance was widespread in Belgium, Sweden, England, Russia and Spain but the most numerous testimonies relate to the German speaking area, where it is still practiced in a vast area of Bavaria with the name of Bandltanz. In Italy maypole dancing is present in the area of Campania in the carnival period (‘Ndrezzata, Palintrezzo, Ribbons of Love), in Petralia Sottana in the province of Palermo (Ballo della Cordella), in Piedmont (Bal do Sabre); finally, the only case in Abruzzo in addition to that of Penna Sant’Andrea, the maypole dance survives in Castiglione Messer Marino as an itinerant carnival rite (Dance of the Bride).

The extraordinary geographical extension of the dance strengthens the hypothesis of its antiquity; some studies connect the choreutical ribbon interlacement to arboreal dances practiced in relation to the cult of the trees of Neolithic origin based on the evocation of the vital force and fertility. The dance has propitiatory functions as testified by the practice today still in force in Penna Sant’Andrea, where the interlacing of coloured ribbons is often performed at weddings as a sign of hope for the married couple. The hypotheses about the origins of the dance in Penna Sant’Andrea are controversial: it may have been introduced by some Lombardi masons that in the Renaissance period worked on the restoration of the local Church of Santa Maria del Soccorso or introduced by the Spaniards and then spread to other areas of the Kingdom of Naples. It is also possible that such influences were added to a local tradition, enriching it with new elements.

The traditional dances from Penna Sant’Andrea have been encoded in the course of the twentieth century by the “Laccio d’amore” (Ribbons of Love) folk group . The zenna cupertë, is a processional dance for transfers, used in the past for moving from one district to another and divided into two phases, the procession and the gallery. The saldarellë is performed in pairs and inserted into a formal framework for simulating courtship while the trallallerë is an accentuation of the courtship to the rhythm of quadrille. In the polchë men and women dance round in opposite directions, giving first the right hand and then the left at every encounter with a different dancer. The actual maypole dance is characterized by twelve pairs of dancers braiding twenty-four coloured ribbons around a pole in a differentiated series of weaves and dance steps. There are five different types of weaves and levels of complexity, performed to the rhythm of Saltarella (simple pole, the pole in pairs, the pole at fours, the double pole and the treccette (plait), guided by commands in dialect and accompanied by the two-bass organetto (ddu bottë), accordion, tambourine (ciuciombrë), guitar and friction drum (battafochë).

The dance of the ribbons

Weaving of the ribbons during a performance by the “Laccio d’amore” group.

Practiced in the past as a carnival ritual, the dance of the ribbons of love has become over time the exclusive patrimony of the homonymous folkloristic group, which was set up at the beginning of the twentieth century and gradually developed over the subsequent decades, participating in important events, among which the marriage of Prince Umberto of Savoy in Rome in 1930. Later, with the numerous performances in national and international contexts, the “Laccio d’amore” established itself as one of the main local folk groups in Italy; in 2005, at the request of Cesare Baiocco and on the basis of documentation that testified the centuries-old presence of the dance in Penna Sant’Andrea, the regional administration acknowledged the “Ribbons of love” as a non-operational heritage asset in the Abruzzo region. In the wake of this process of affirmation and enhancement, it is worth mentioning the commitment that the “Laccio d’amore” association and the Pro-loco of Penna Sant’Andrea have undertaken since the mid-1970s, in the conception and organization of the yearly meeting of the International Folklore Festival, consolidating over the years the dream of Cesare Baiocco and of the late mayor Antonio Fabri.

The research by the ethnochoreutic scholar Giuseppe M. Gala shows how in the course of the past century , as the dance of the ribbons has been engaged in a choreographic context mainly addressed to a dimension linked to the stage and to performance, some elements belonging to the original ritual form, have been lost and those bound to the expression of typical peasant dance have been gradually weakened. The dance has, however, been enriched by new formations and its constant practice, maintained by all generations, has had the great merit of encouraging the uninterrupted transmission of the main ethnochoreutic and ethnomusical traditions of the village, providing a continuous opportunity to strengthen the intergenerational social dimension, and also the sharing and discussion with other groups on a national and international level through the development of relations and cultural exchanges. This phenomenon of substantial continuity of performance has covered not only the repertoires linked to dance (saltarella, polka, quadrille, weaves) but also the strictly musical practice – as evidenced by Gala’s publications -, thanks to the presence of important manufacturers and players of the two-bass organetto originating in Penna Sant’Andrea or specially hired to accompany the folkloristic group, among whom we recall Loreto Della Noce, founder of the homonymous manufacturing company, his son Giuseppe Della Noce, Fanciullo Rapacchietta and Basilio D’Amico, some of the most important players of the ddu bottë in the province of Teramo and the entire region. Finally, we can ascribe to Gala the idea of “Estadanza”, the itinerant school of dance, held on numerous occasions in the summer in Penna Sant’Andrea in order to support a deepening awareness of local dances. We must also note the untiring efforts that the “Laccio d’amore” group puts into teaching activities organised for the young generations which aim to encourage the insertion of new members in the group and guarantee its continuation in the future.

OTHER ASSETS IN THE SAME MUNICIPALITY 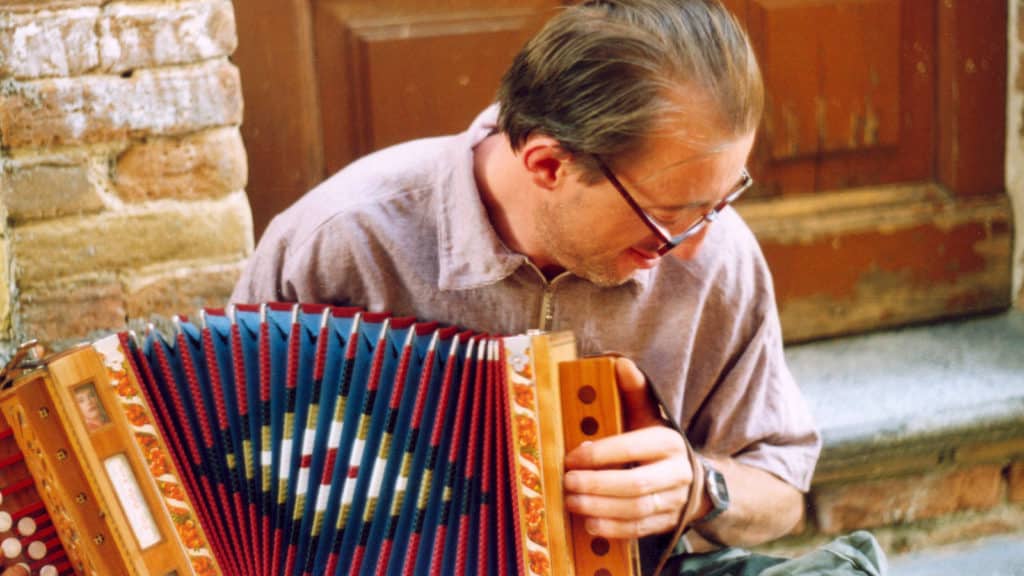 The tradition of the “ddu bottë” organetto...

Open up! It is Saint Anthony!

The collection of alms of Saint Anthony...